Kolokolo Community in Ikpoba-Okha Local Government Area of Edo State on Friday denied abducting a badge belonging to Sahara Enageed Resource Ltd, an oil firm as well as its crew members. The community has also denied kidnapping a badge as well as crew members of the oil firm. In continuation of its peaceful protest, members of […] 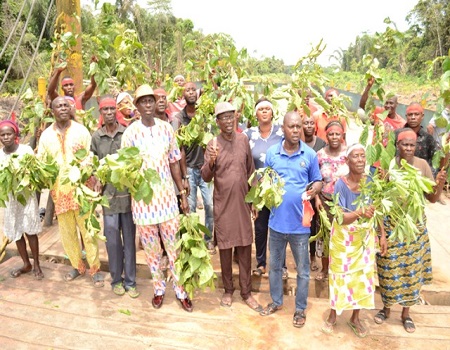 Kolokolo Community in Ikpoba-Okha Local Government Area of Edo State on Friday denied abducting a badge belonging to Sahara Enageed Resource Ltd, an oil firm as well as its crew members.
The community has also denied kidnapping a badge as well as crew members of the oil firm.
In continuation of its peaceful protest, members of the community have continued, on Friday, to chant solidarity songs, cook, eat and sleeping in the creeks over an alleged marginalization meted to them by the oil firm.
This is coming barely six days after masquerades led the community in a peaceful protest with their neighbours, Ikara and Ajatiton communities.
The border community within Koko, headquarters of Warri North Local Government Area of Delta State has also vowed not to live the creeks where the oil firm operates until their demands were met.
Kolokolo Community Youth President-General, Comrade Sunny Etchie, said, “This is the thug boat that Ajoki Community people alleged that was kidnapped” as pointed towards it.
“Right here now, this is the thug boat and all crew members as at the day before yesterday said, they are tired and have gone home and appealing to Sahara to settle with the Community that they are going home.”
“We are on peaceful protest since 6 days ago. This is the 6th day. We sleep here, eat here and cook here until Sahara answer us.”
Etchie also denied any plans by Kolokolo Community to blow up pipelines belonging to Sahara Enageed Resource Ltd stressing,”There is nothing of such.”
While noting that some Ajoki Community leaders summoned them before the Joint Task Force,JTF, Etchie said, “We are not leaving Herr until Sahara Enageed answer us. We stand on this even if it will take us one year.”
Earlier, a leader of Kolokolo Community, Mr Benson Ayokotse narrated how the Community’s leaders were invited by the Commanding Officer of the Nigerian Army 19 Battalion in Koko alongside with Oil firm for a meeting.

ALSO READ: Hospital apologises after stillborn baby is flushed down the toilet by mistake

He said the officials of the Oil firm were absent at the meeting but after three hours, “The intelligence called on Sahara and they refused to come and later, the CO asked us to go back until Sahara is ready.
Ayokotse said his Community will not relent until Sahara listens and considers its plight.
“Moreso, we are not fighting against any of our host communities. We are fighting against Sahara Enageed Resource Limited who is taking our God-given resources to punish us, deprive our children of going to school.
‘Since NPDC hand over us to Sahara, let them come and tell the whole world that they have given scholarship to any of our children.”
He added that since NPDC handed over it is the responsibility of Sahara Enageed to meet with their demands.
Ayokotse urged the Federal Government to ask Sahara Enageed to come to its aid.