It all started on January 15, 2005, at a conference of academic and non-governmental experts on Africa, convened by the National Intelligence Council (NIC), where the Mapping of Sub-Sahara Africa was published. In that conference, the most important message delivered by the conferees was that even in this age of globalization, local factors will determine Africa’s fate. These local factors include religiously inspired terrorism, sharing of revenue accrued from hydrocarbon sales, corruption etc. The report was categorical that Africa’s oil producing states, and a handful of other African countries committed to governance reforms have the best chance of attracting international investment needed to compete and survive.

However, other African countries, including some failed states, plagued by poor leadership, divisive ethnic politics, decayed government institutions, geographic constraints may be unable to engage the international economy sufficiently to reverse their downward trajectory.

What has made that report famous was the postulation that Nigeria, will be balkanized in 2015, considering the following factors:

Nigeria has been the focus of this report, with many condemning the report as false. The NIC is a think-tank that analyses global events and map out the likely future of different regions of the world. In 2005, the level of patriotism was higher than what it is today, but Nigerians were not unaware of the fact that their leaders are locked in a bad marriage that all dislike but dare not leave. They are aware that there are possibilities that the precarious equilibrium in Abuja could be disrupted.

In straight terms, all dislike the marriage of many tribes and tongues, but are very dependent on the hydrocarbon revenue, that keeps the country together. Another fear was that, if Nigeria were to become a failed state, it could drag down a large part of the West Africa region. A failed Nigeria probably could not be reconstituted for many years.

This report became so famous that a lot of Nigerians were actually looking forward to the year 2015. Nigeria was likened to a trailer that was speeding down-hill, without breaks or shock-absorbers; and no effort was being made to stop the slide. Politicians were making incendiary statements and everyone was ready for the D-day.  Being an election year, the report became a point of reference for many. Instead of an upturn in the economy, the billions of dollars generated from hydrocarbon sales were being stolen and squandered. Corruption was rife and Nigeria occupied its place of pride as the No. 1 most corrupt country, on the Global Corruption Perception Index.

As the general election of 2015 approached, many politicians evacuated their families overseas, afraid of the chaos and anticipated violence that will occur when the results of the elections are announced. Multi-national companies, especially in the oil and gas sectors were withholding their investments until after the elections. This greatly affected the Foreign Direct Investment (FDI), which dropped from $1381.06m in July 2014 to 624.87m in July 2015. The world was holding its breath for Nigeria, unsure of what the outcome will be.

The campaign was fierce, between the ruling Peoples Democratic Party (PDP), led by President Goodluck Jonathan (from the minority Niger Delta, who was seeking re-election) and a new coalition of smaller parties, the All Progressive Congress (APC), led by retired Major General Muhammadu Buhari (a Fulani and former Head of State from the North). Buhari  conducted a campaign of fighting corruption. Many were in support of that objective but were never sincere about fighting corruption. Intelligence reports were indicating that if the PDP wins, there will be a blood-bath across the country. This was because of some ethno-religious factors that have already started to play out during the election campaigns.

A national catastrophe was averted when Goodluck Jonathan, did the uncommon act in African politics, by making a phone-call to his APC opponent, Buhari, conceding victory. That singular act was like a long expected torrent of rain on a baked arid desert soil.  Many analysts congratulated themselves that the NIC doomsday forecast on Nigeria has been finally proven wrong. Hopes were rising that Nigeria was back on track and by December 2015, FDI scaled up to $1213.98m.

By the first and second quarter of 2016, the discordant voices started and this time with very high tempo. Companies were skeptical. The Naira was losing value, as the price of oil dived to an all-time low of $30 per barrel in the international market. Things were not changing with the rapidity that was expected. Kidnapping became a national past-time. Brain drain was climbing up the scale. Many Nigerian youths, in their attempt to look for greener pastures, crossed the Sahara Desert and many drowned in the Mediterranean Sea while crossing into Europe. People started realizing that there is nothing to gain in this marriage that they have been forced into by Lord Frederick Lugard in 1914.

The Indigenous People of Biafra (IPOB) sustained their agitations for a sovereign state. The new APC government threw in a lot of resources to weaken the insurgency in the North-East by Boko Haram. Their attempt at establishing a Caliphate in the North-Eastern region of the country was crushed. However, the more than 200 school girls kidnapped by Boko Haram were still not rescued.  Many militant groups started emerging in the Niger Delta. In the fore-front is the Niger Delta Avengers, who felt that the oil producing areas of the Niger Delta is being taken for a ride, without any meaningful development in the area. By 2017, the Arewa Youths Movements came out with the Kaduna Declaration to ask all Igbos to leave the North by October 1, 2017 and also warned northerners in the South-East to come back home.  Yoruba youths will not be left out in this imbroglio, so they got together on July 27, 2017 at Ogba in Lagos to declare an Oduduwa Republic. Their country flag was also displayed.

Suddenly Nigerians started experiencing divisions everywhere. This is not helped by the fact that the president fell ill and had to be flown abroad for treatment. The PDP was in disarray after losing the election and cannot coordinate any form of opposition to the ruling APC. The APC on its part started showing signs of imploding. The phone call made by Jonathan to Buhari actually pulled back the country from diving off the cliff, but of recent, the secessionist groups have gained more momentum and are bent on actualizing a separation from the mother-ship, Nigeria.

Indigenous People of Biafra (IPOB) – They are a secessionist group that operates a twelve points objectives and are mainly from the South-East of Nigeria, made up of the Igbo tribe. Their main objective is to advocate for the rights

and fundamental freedom of the remnants of the Biafrans who are scattered in all parts of the world as refugees and people on self-exile post-war and to advocate for their right to self-determination by judicial process, public lectures and seminars on human rights and advocacy for justice fairness and the rule of law. The have subsumed their predecessor, the Movement for the Actualization of the Sovereign State of Biafra (MASSOB) and hope to actualize the Republic of Biafra. The group gained more gusto after their leader, Nnamdi Kanu was released from detention. 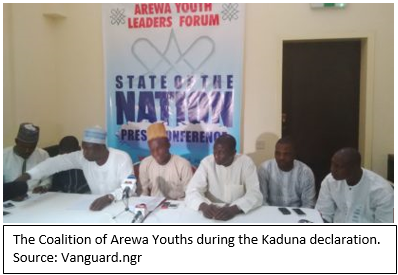 The Coalition of Arewa Youths – The group made the Kaduna Declaration, ordering all Igbo’s of the five South Eastern states to leave Northern Nigeria by October 1, 2017. They also asked Northerners in the South East to leave the area. The youth movements that signed the declaration include Arewa Citizens Action for Change, Arewa Youth Consultative Forum, Arewa Youth Development Foundation, Arewa Students Forum and Northern Emancipation Network. There is tacit support for this group in the north, as they have dared the security agents to arrest them.

The Yoruba Liberation Command (YOLICOM) – This group came together in July 2017 to declare the Oduduwa Republic and announced their quest for secession. Their worry is that, even the widely acclaimed restructuring agenda is not sufficient and will not be an all-inclusive package in the long run. They are sympathetic to the Biafra cause and many meetings of solidarity are being held between members of IPOB and YOLICOM. Some notable Yorubas have also met with Nnamdi Kalu, the leader of IPOB.

The Adaka Boro Avengers (A 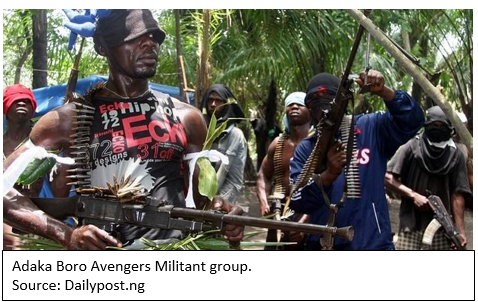 BA) – There has not been much agitations from the Niger Delta on secession. The past and existing groups have been more concerned with resource control and the clean up of their despoiled environment from oil and gad exploration. However, one of the militant groups, the ABA group has threatened to declare a Republic of Niger Delta on October 1, 2017. The group insists that there is no going back because the Nigerian State has “lost its unity.” Curiously, some political leaders in the Niger Delta are also giving the Nigerian government ultimatums to fulfill the needs of the region or risk losing the Niger Delta region.

In an attempt to halt the apparent slide, former president Ibrahim Babangida has posited that the country be “restructured.” This is a word that has been resisted by many political actors in the country. Suddenly, it is the common buzz word across the country. Some have suggested that restructuring should come after a constitutional conference. There is this need to jettison the 1999 Constitution of Nigeria, written by the military for Nigerians, and write a new one for the peoples of Nigeria, by Nigerians.

However, there is this opinion from a former top military officer that he does not see those who hate to see Nigeria as one, as a group but a clique that exploits the country, who have mismanaged the future, invest in disintegration, misinformation and creating division among Nigerians. It all boils down to selfishness.

The drumbeats for secession is growing louder and louder by the day. It is strongly believed that all these groups have the tacit backing of their politicians and traditional rulers. The question now is whether the amalgamation of 250 tribes and 450 languages was a good idea or not. There are arguments from different ends of the spectrum. Some believe Nigeria is stronger and will maintain its leadership role in Africa and the world if she remains as one entity. Others believe that Nigeria has lost its original objective of building an egalitarian society, where everyone is equal.

To keep Nigeria one is the foremost job that the present government have to undertake. Suppressing these agitations will only bring negative results. Government must have the political will to keep the country one. Some have suggested a referendum, if Nigerians want to be under the same country. Others have suggested the government implement the recommendations of the national conferences that have been held in Nigeria. Shying away from these realities might just postpone the NIC report on the collapse of Nigeria. The forecast might still be a reality except the Federal Government moves quickly to once again pull the country from the brink of collapse.

Mr. Amachree retired from the Nigerian State Security Services as an Assistant Director in 1999 and went into Industrial Security, where he worked for Halliburton Energy Services, as Security Manager. He later moved on to Addax Petroleum Development Nigeria Limited as Country Security Manager. He was responsible for Maritime Security, Executive Protection, Loss Prevention and Security Management. In 2012 he was hired by the General Electric Company (GE) as Senior Regional Security Director for Sub-Sahara Africa. He is at present a Security Consultant and Owner of Zoomlens Security Solutions, Lagos.

Mr. Amachree was Chairman of ASIS International, Nigeria Chapter 206 and later Regional Vice President (Region 44 – West & Central Africa). Dennis is a Fellow of many professional security institutions and the current President of the Security Strategic Group (SSG). He has received many awards in the security industry including the Nigerian national honours award of Member of the Order of the Niger (MON).