Africa – A Soft Landing for ISIL [A Proactive Response] 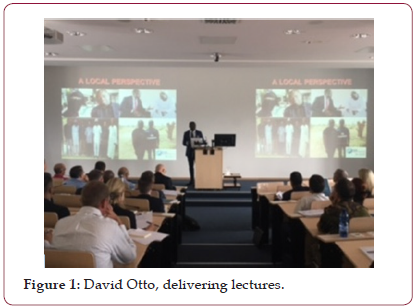 Delivering his lectures, Mr David Otto urged senior military trainees, NCOs and Civilian equivalents from a selected number of NATO States and partner Nations to keep a cautious eye on the changing environment in global jihadist group location, tactics and
network with particular reference to the relationship between Daesh in Syria and Iraq, Boko Haram in the Lake Chad basin , Al Shabaab in East Africa , Al-Qaeda in the Islamic Maghreb (AQIM) & Al-Qaeda in the Arabian Peninsula (AQAP) amongst others.
Otto who is also the Senior Counter Terrorism Advisor for Global Risk International UK LTD maintained that the current Kinetic pressure on Daesh in Raqqa and Mosul by coalition forces will not only result in a ’balloon effect’ displacement, but may likely force desperate ‘Foreign Fighters’ to seek for alternative operating environments in other safe Daesh Wiyalats outside Syria and Iraq. “For the first time since splitting from Al-Qaeda in Iraq Jabhat al- Nusra and the declaration of the so called ‘Caliphate’ by the self-declared Caliph Abu Bakr Al- Baghdadi in June 2014.

Daesh is experiencing its worst defeat in the hands of the coalition forces in their strongest holds of Mosul and Raqqa.

Daesh has three natural options, either fight, flight or freeze. Their fighters are not trained to freeze or surrender. Daesh will continue to engage in Jihad, however in the circumstances, the remaining leadership, will consider relocation, preferably somewhere they have a formidable Wiyalat where they will be able to re-strategies, get resources, recruit, rearm and mount a different strategy not seen before – perhaps the use of Chemical or Biological agents for maximum effect.”

On the question of what Jihadist groups could provide Daesh needed support in trouble times like this, Otto said;

“Looking at the recent upsurge in Boko Haram and Al-Shabaab attacks against hard and soft targets in Nigeria and Somalia, and the activities of the Maute group & Abu Sayed in the Philippines, there are two possible ways this may play out for Daesh.

First, by carrying out multiple and continuous deadly attacks against hard military coalitions, it appears these Daesh Wiyalats are putting themselves forward as alternative ‘Caliphate’ to Mosul and Raqqa.

These jihadist groups are showing Daesh leadership their resilience and willingness to continue the global Jihad against the near and far enemy and create a safe space for fleeing jihadist. Alternatively, the
current upsurge may be a direct call by Daesh leadership itself to all its Wilayats to carry out deadly and continuous attacks to act as a distraction tactic to coalition forces who are bent on retaking Mosul and Raqqa by all means”

“What is certain is that we shall see an increase in disillusioned and blood thirsty foreign fighters returning ‘home’ and either perform Jihad immediately on successful arrival at home soil – like the Manchester Arena bomber, Salman Abedi or become sleeper cells only to strike at unexpected moments with unexpected tactics when directed to do so by what will be left of Daesh leadership command. Other more active Jihadist who find no possibilities of going back home due to high security alert or other practical reasons may embark on joining other wilayats where they can easily blend with the local population and other jihadist to continue their Jihad.

As ‘culture eats strategy for breakfast’ What we may not likely see is a ‘white European Jihadist’ from the battle field of Syria or Iraq joining Boko Haram ranks in Northern Nigeria for example.

Such a Jihadist may likely find ease joining the likes of AQIM in Algeria or Mali, AQAP in Yemen or Somalia based Al-Shabaab, which provides an environment they may easily blend with lookalike local fighters, as seen in the infamous case of British born Samantha Lewthwaite (White Widow) who joined the Al-Shabaab ranks and allegedly marrying Al -Shabaab terror Chief Sheikh Hassan Maalim”.

A global coordinated effort with NATO playing a key role alongside the UN, Interpol, European Union, and Africa Union needs to watch for the influx of Daesh/ISIS fighters making their way to Africa and beyond in need for a “soft landing” and haven.

Mr. Otto’s lectures included the models that articulate different types of insurgencies that survive and proliferate throughout Africa and Middle East as well as coordinated anti-terrorism and counterterrorism strategies to effectively combat terrorist motivation, recruitment models, radicalization stages and their identification.

Attendees from the seminar had rave reviews for Mr. Otto: “This is exactly what we have been looking for,” said one of the trainees who opted to remain anonymous for security reasons, “where these radicalized fighters are going is where we need to focus our  prevent and intelligence resources and by proactively engaging the local communities that will give them a home, whoever wins the trustfirst, wins the fight, we are in a race of time.”

Mr. Otto added, “By integrating sound technology and traditional intelligence collection techniques into the Anti-Terrorism model advocated by SISO, identification, disengaging and deradicalizing these fighters is a manageable process with the right structures and expertise.

This is doable now, with minor adjustments to existing strategy. Clearly a different approach is needed, and the timing is right for NATO and other strategic partners to make great strides in applying the techniques and models in this course to effect significant change in the Anti-Terrorism and Counter-Terrorism strategies to get the most desirable results – less insurgency and more long –term peace and stability.”

To solve the problem right, you must first solve the right problem.

David Otto is the CT Director of TGS Intelligence Consultants Ltd and the Preventing Radicalisation and Violent Extremism Programme – Step In Step Out (SISO) based in the United Kingdom. He is also Senior Counter Terrorism Advisor for Global Risk International. David’s Work focuses on designing and implementing sustainable Anti Terrorism, Counter Terrorism and Organised Crime solutions to prevent and respond to vulnerabilities, political Instability, insurgencies and Organised Crime – between the geographical boundaries of the West and Africa. Under TGS Prevent initiative – SISO – David Otto was instrumental in organising the first ever African focused Counter Terrorism awareness conference in London (26th May 2015) in collaboration with the University of East London on the topic – ‘RADICALISATION. He is frequently invited by NGOs including the UN, NATO, Interpol as a frontline practitioner and academic to share his knowledge and experience on government community resilience strategies in Europe, Asia and Africa, especially on national proactive intervention initiatives within local communities, national security sectors and prison settings. He is regularly invited and quoted by key news channels Aljazeera, BBC News, Arise TV, BEN TV, PRESS TV, VOX Africa, Channel TV, and AILTV …as an expert to share his opinion on security and Counter Terrorism from an African and western link perspective. His work has been published, and features in international newspapers, social media – IBTIMES,CNN Awake Africa, Africa Voices etc. David holds a BA (Hons) in Law and Criminology; Master of Science (MSc) in Counter Terrorism and Organised Crime; Diploma IMIS -Information Technology 1 and 2; Micro-computer and Network Systems; and Business Communication. David Otto is a Certified Anti-Terrorism Specialist (CAS) & Certified Master Anti-Terrorism Specialist (CMAS) with the Anti-Terrorism Association Board. He is also a Certified Level 2 Prevent and Safeguarding Trainer.